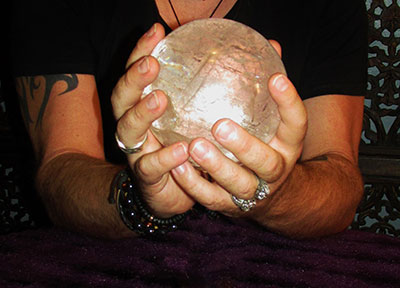 This seems to be one of the most popular requests that I get from clients. The future readings and Visions I get from crystal gazing are usually very accurate. It’s a very relaxing and calming energy. This is about picking up on vibrations as well as energy, and possible blockages.

Though Crystal Gazing can be used for future readings, I prefer to use Crystal Gazing to connect with your aura and energy and what that tells me. Essentially your emotions, soul path and destiny play a role in Crystal Gazing. I may also be guided to pass on a message from your guide, guardian angel or even an ancestral guide, who wishes to help and guide you on your current path.

Crystal Gazing is a method for seeing visions by means of gazing at a crystal sphere like shape. Crystal Gazing also known as Crystal-Seeing or Crystallism has traditionally been seen as a form of divination or scrying, with visions of the future and/or something divine.

Crystal Gazing denotes several different forms of a variety of objects, and there are several schools of thought as to the sources of the visions. The size of ball preferred varies greatly among those who practice Crystallomancy. Some gazers use a "palm ball" of a few inches in diameter that is held in the hand; others prefer a larger ball mounted on a stand.

Crystal gazing may be used by practitioners - sometimes called "Readers" or "Seers" - for a variety of purposes, including predicting distant or future events, to give character analyses, to tell fortunes, or to help a client make choices about current situations and problems.

More in this category: « Balance Chakra's Meditation »
back to top