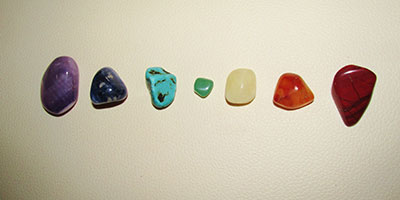 Chakras are spinning energy centres in the body, which process subtle energy and convert it into chemical, hormonal and cellular changes in the body. Chakra is a Sanskrit word meaning 'wheel' or 'disc'.

Why Balance your Chakras

In order to bring more harmony to our entire system, the chakras are balanced. This assists in preventing the chakras from being blocked or overactive. Each of the chakras relates to different levels of consciousness, developmental stages of life, emotions, thoughts, colours, sounds, body functions and much more.

There are seven major chakras, each associated with a major nerve plexus and a major endocrine gland. They are situated in a vertical line ascending from the base of the spine to the head. The lowest, called the root chakra, is near the coccyx. The second is located near the spleen. The third or solar plexus chakra lies in the upper middle abdomen below the tip of the sternum. The fourth, also known as the heart chakra, can be found in the midsternal region directly over the heart and thymus gland. The fifth or throat chakra is situated in the neck near the Adam's apple. The sixth or brow chakra is in the region of the mid-forehead. The seventh or crown chakra is located on top of the head.

Contact me for guided meditations and for balancing of your chakras.

More in this category: « Theta Healing® Crystal Gazing »
back to top